The poem and drawing for The October Beast sprang from not only Kevin’s love of Halloween but also from the fact that he and Laura are both rather short people.

Just like the final Ghosts Love Candy illustration, Kevin went the traditional route for creating this particular drawing. Follow me and I’ll show you how!

Everything starts with pencils on toned tan paper. The pencils are rather simple and don’t have a whole lot detail to them. That will be added after. Once the pencils are complete Kevin begins work with his pens. He uses various sizes of black pens and a white pen to begin to slowly create darker and lighter values with layers of hatching.

For this particular piece Kevin started in the foreground with the bag of candy and the magic created by the Old Pumpkin Beast.

Next, Kevin moved onto the candy that lay on the ground and then made his way to the Pumpkin Beast himself! Using different styles and directions with the hatching Kevin creates different textures and looks for each portion of the drawing, like the Beast’s clothes, his belt, his arms and his legs. 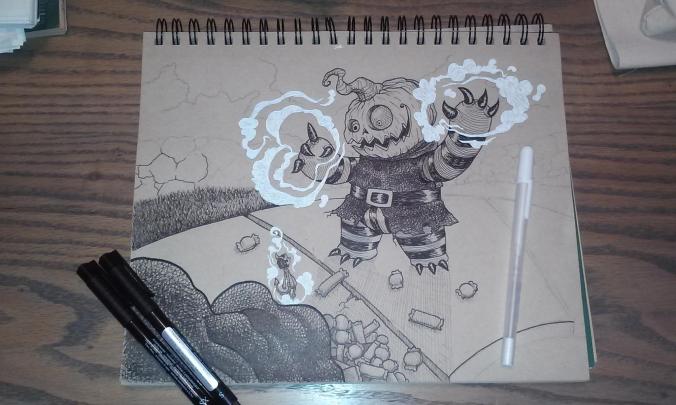 Kevin does the same thing to the rock wall, the trees and bushes and the rest of the sidewalk. Once all the black and white work is completed he adds in some more darker values with a warm gray Copic marker just to make sure that the October Beast and the kid and his candy are the focus and other bits fall into the background. Once that’s done Kevin tosses in a dash of color to add a little pop!

Finally, the drawing is scanned into the computer and given a few additional touches. A small hint of texture is added to the drawing and some of the color is popped out a bit more. After that, it’s all done and you have yourself a haunting picture and poem just ripe for the Halloween season!

Out in the woods lurks the old pumpkin beast.
His looks are quite frightening to say the least.
He comes out each year as the leaves turn and fall
The only thing is…. He’s not very tall.
He does his best to cause a terrible fright.
But it doesn’t work well with his severe lack of height.
They laugh and they joke about the monstrous small-fry
Whose pumpkin head is so small it wouldn’t fill a small pie
But then Halloween comes as it does every year.
And that is the night when their laughs turn to fear.
You see there’s much more to the old pumpkin beast
And on Halloween night his power’s unleashed.
All those who laughed and joke at his height
Feel the full power of his old pumpkin might!
For on this All Hallows Eve with every treat that they get
Comes a special trick that they won’t soon forget.
They eat up their candy before they can blink
But each one that they eat is another inch that they shrink
When they finally realize how their size has decreased
They find they’re much smaller than the old pumpkin beast.
That is the moment when they reap what they sow
And learn a hard lesson that everyone should know.
The tiny are mighty and don’t you forget
Or on All Hallows Eve you’ll be very upset.